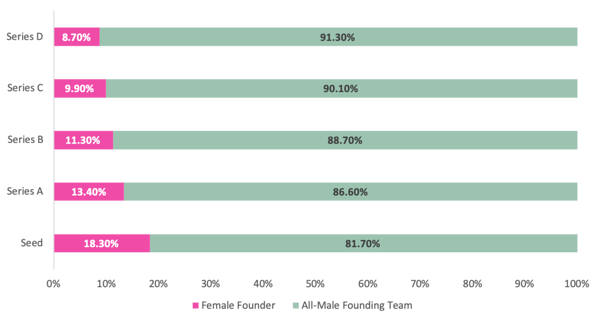 As we discussed in our first-time manager blog post: new perspectives are good. Especially in such future-oriented asset classes as venture capital. Therefore investing in underrepresented managers is likely to enhance LP returns. And finally, there is now data to support that:

Some of these extra returns may be attributable to female founders, as women-led VCs are also two times more likely to invest in women-led startups, and startups with female founders produce twice the revenues per dollar invested and performed 63% better than all-male founding teams.

All these extra returns make a clear case for investing in female VC managers and female founders, and yet both of them are still in the clear minority in their markets. We will also explore why that is and what can be done about it in this blog.

STATUS QUO OF THE MARKET

According to great research work done by European Women in VC, only 15% of European VC fund partners are female. And only 8% own equity in their companies, which is a more accurate representation of true partnership decision-making power. We also recommend checking out Sifted, which is doing a great job in keeping track of female VC partners and angels in Europe

Currently in the United States, women make up approximately 11% of investing partners at VC firms.

Although research has begun into representation, there is still very little data on returns, although the largest LPs in the market should be in possession of long-term data that would allow performing such research. But what there is, is encouraging: the Harvard Business Review found that VC firms with more female partners (10% more) had 1.5% higher fund returns, and 9.7% more profitable exits.

In the US: only around 13% of venture capital dollars go to startups with a woman on the founding team. The 30-year average of all-female founders’ share of VC funding is 2.4% – almost identical to the share in 2018 (2.3%).

And the problem only compounds across the startup’s journey to exit: as stages advance, fewer and less women receive funding:

Companies with at least one female founder generate 78 cents of revenue for every dollar of venture funding, while male-led start-ups generate roughly 31 cents.

PitchBook All Raise 2019 found that teams with at least one female founder exit faster (6.9 years versus 7.4 years for all-male teams) and are growing faster at the time of exit.

Furthermore, a review of First Round Capital’s first 10 years found that “companies with a female founder performed 63% better” than their investments in all-male founding teams.

An IFC study found that venture capital-backed companies in emerging markets with gender-balanced leadership teams had a 1.6 times increase in their step-up valuation or change in valuation between rounds of financing. The step-up valuation for gender-balanced teams is 5% higher than leadership teams with 10-30% women and 13% higher than leadership teams with less than 10% women. (von Friedeburg et al., 2019). By way of background, buyout funds use leverage to purchase majority stakes in more mature businesses, while venture capital funds tend to make minority investments in startups and small businesses.

The lack of gender equality in funding startups leads to further problems. It affects the overall job picture for women exponentially. It’s also likely to slow the recovery and efforts to tackle inequality.

This difference in questioning appears to have substantial funding consequences for startups. Examining comparable companies, we observed that entrepreneurs who fielded mostly prevention questions went on to raise an average of $2.3 million in aggregate funds for their startups through 2017 — about seven times less than the $16.8 million raised on average by entrepreneurs who were asked mostly promotion questions. In fact, for every additional prevention question asked of an entrepreneur, the startup raised a staggering $3.8 million less, on average.

Fortunately, there is a solution: If entrepreneurs change how they respond to prevention questions, they may be able to raise more funds. TechCrunch Disrupt entrepreneurs who were asked mostly prevention questions but gave mostly promotion responses went on to raise an average of $7.9 million in total funding. Conversely, those who responded to mostly prevention questions with mostly prevention answers went on to raise an average of only $563,000. So an entrepreneur who is asked to defend her startup’s market share would be better served by framing her response around the size and growth potential of the overall pie than by merely stating how she plans to protect her share of the pie. There is also evidence that the same pitch presented by men (especially by attractive men) compared to women is received more favorably by investors.

As Harvard Business Review states “The solution is not for VCs to suddenly start supporting startups simply because they’re founded by women. It’s to weed out the institutional patterns and thinking that prevents VC firms from recognizing the great potential of ideas presented to them.”

These biases outlined above influence both male and female VC investors – although it’s worth bearing in mind that women were in a minority in the room and most likely also less experienced, and therefore their questions and actions may have reflected the majority sentiment – we won’t find out the true results of this experiment until the participants are on parity.

However, female investors have demonstrated the ability to overcome these biases in a way that results in them in still being twice as likely to fund female founders, as demonstrated by an excellent Kauffman study.

Female VC partners lead noticeably more early rounds in Female Founding Teams than their male VC counterparts. Figure 4 shows that at the Seed stage 32% of women partners’ investments are in Female Founding Teams, compared to only 16% of male VC leads; in other words, women VCs invest in twice as many female-founded startups as their male counterparts at the earliest stage of company development.

At Series A, women VC partners have approximately a 25%/75% split between women founders and all-male founders, whereas male VCs have a 12%/88% split; again, twice as much.

HOW DO OVERCOME OBSTACLES TO INVESTING IN DIVERSE MANAGERS?

We also included this section in our first-time manager’s post, but as the logic is the same, we’ll repeat it here in case you haven’t read that one. Many funds led by diverse managers may appear too small for institutional allocation. That’s ok. You can commit to multiple generations. Or you can commit to a group of them at once and put an SPV in the middle so it still looks like just a single line in your portfolio if that’s what you need.

The managers for smaller funds will work twice as hard for that if they feel they need to earn it, they will be hungry to establish themselves in the market and will be grateful for the opportunity, be it through sharing co-investment opportunities or making introductions to strategically interesting portfolio companies. Also, while it may be tempting to think that female fund managers do not have the same deal flow networks as their male counterparts, it is worth asking whether those networks are simply not as familiar to the LPs, which does not necessarily equal worse.

WHAT DO DIVERSE MANAGERS NEED?

The main issue is that most Limited Partners are not aware of the above statistics and rationale. So what first-time managers need is for the word to spread about this.

SOURCES OF DATA AND FURTHER READING